TIP: If you increase your CTR, then you get more views on your videos. As simple as that!

As we can all agree on that point, the question we will tackle today is:

Should thumbnails be optimised BEFORE publishing?

The ability to A/B test YouTube thumbnails after publishing has been around for some time, with tools such as TubeBuddy helping you do these tests in an automated manner. Even before the automated solutions were available, it has always been possible to test thumbnails on live videos for as long as YouTube has allowed thumbnails to be changed or edited.

However, this leaves a lot to be desired. The majority of videos experience an initial spike in views and receive a significant proportion of their views within the first few days. Existing thumbnail testing solutions often recommend that A/B testing should be avoided on new videos for this very reason. For example, TubeBuddy recommends waiting until a video is at least 5 days old before doing any A/B testing. This is a perfectly valid recommendation, with even YouTube stating that an initial spike often occurs for new videos:

“[1] CTR is often highest right after upload when some of your most passionate fans and subs might see the video at the top of their home page and subs feeds. [2] As total impressions grow beyond your core audience, CTRs are expected to decline until reaching a relatively stable percentage (this is totally normal).”

Other reasons why testing a thumbnail after a video is live is sub-optimal:

At this point, you may be wondering if it’s possible to test thumbnails before publishing, and if so, how? This is where Thumblytics comes in. Thumblytics takes different versions of your thumbnail (along with thumbnails from your competitors) and shows it to hundreds of people. The thumbnails you choose for your competitors act as the control in the experiment. By doing this, Thumblytics is able to calculate a click-through rate for each version of your thumbnail, giving you the data you need to make an informed decision as to which thumbnail will perform best. 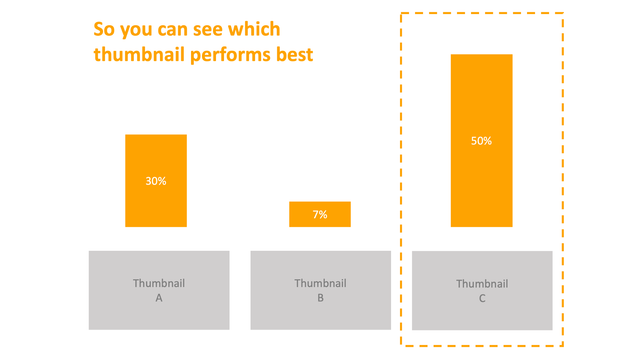